Richmond has signed its first VFLW player ahead of the Club’s inaugural season.

Natarsha Bamblett has committed to the VFLW Tigers as a rookie after starring at last weekend’s Koorie Women’s Football Carnival.

Playing for the Fitzroy Stars, Bamblett was named player of the carnival after a dominant display.

The 22-year-old is no stranger to Richmond, having first come in contract with the Club’s centre for Indigenous youth, the Korin Gamadji Institute, in 2012.

A young community leader, she was named Ms NAIDOC in 2017 and is also an Ambassador for the David Wirrpanda Foundation.

Bamblett is a former netballer and product of Rumbalara Football Netball Club, an important partner of the Richmond Football Club through the Next Generation Academy Program.

Bamblett has only been playing football for one season – where she played in a Grand Final with Northern Football League club West Preston.

She came to the attention of Richmond’s recruiters at the Club’s inaugural VFLW Talent Day two weeks ago.

“I’ve never fell in love with a sport so quickly,” Bamblett said.

“It’s an amazing feeling to be recognised for the hard work that I have put in.

“Richmond’s atmosphere is so positive and vibrant. You walk in to the club and you feel that sense of pride and family and that’s what I’m about. A club that recognises that, I think it’s only a place where I can thrive.”

While she played netball as a junior, football is in her bloodline.

Her uncle Les Bamblett was one of the best footballers in Victoria, having played for Footscray and Melbourne.

“Tarsh is highly competitive, she is a strong tackler and has a great work ethic,” Sheahan said.

“But it is her leadership that sets her apart – she is a young community leader and that translates into her football, where she has excellent communication skills.

“Tarsh’s signing is a great credit to the Richmond Football Club and its centre for Indigenous youth, the Korin Gamadji Institute.

“As a rookie Tarsh will be eligible to play every game in the 2018 VFLW season and we know she will be a great role model for young aspiring female footballers.” 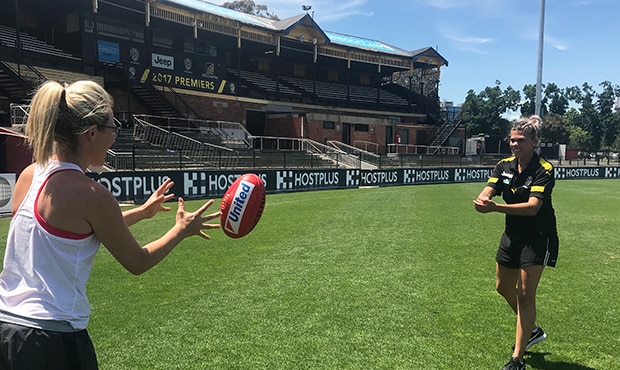